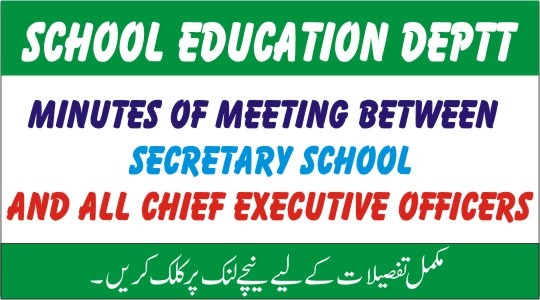 The meeting started with the recitation of the Holy Quran. The Chair welcomed the participants and stressed upon the importance of regular interaction with district formations, for improved service delivery in the department.

Following up on the directions issued in the previous meeting held on 04.05.2020, it was noticed that ADP utilization is still on a lower side. The Chair directed all the CEOs to ensure optimal utilization of ADP funds, till the closure of the financial year, as per the direction issued.

Special Secretary (Operations) briefed the meeting on the performance of districts with regard to the Anti-Dengue campaign. Efforts of CEOs of the five top-performing districts, i.e. Chakwal, Faisalabad, Bahawalnagar, Multan and Attock were commended for their good performance, on the other hand, it was also noticed that seven districts had registered even less than 100 activities on the Dengue control dashboard which is not acceptable. Therefore, the Chair directed that an explanation of CEOs of these seven districts i.e. Mianwali, Hafizabad, Sahiwal, Vehari, Rajanpur, Sheikhupura and Okara may be called for not complying with the directions of the department. It was also observed that there are still 459 dormant users. The Chair directed the Deputy Director Monitoring to expedite the registration of these users with the PITB. The Chair also directed that all SOPs related to COVID-19 must be complied during the Anti-Dengue activities.

Special Secretary Operations) further briefed the meeting on status of verification of posts by CEOs on School Information System (SIS) for online transfer phase currently underway. It was noticed that despite repeated reminders, 11 districts i.e. Bhakkar, Faisalabad, Kasur, M.B.Din, Multan, Muzzafargarh, Narowal, Rajanpur, Sahiwal, Sargodha and Sheikhupura had still not verified the data. The Chair showed  dissatisfaction over the situation and directed that an explanation of these CEOs may be called for not completing the task within the given timelines.

Special Secretary (Reforms) proposed that any amount related to civil works may be parked in Account 5 so it can be used. The Chair agreed to the proposal.

The Chair directed that all the CEOs must ensure distribution of textbooks to the schools by 30th June, 2020 positively and the change of nomenclature boards of the upgraded schools must be ensured, within a week.

It was also directed that the cases pertaining to the Citizens’ portal, CS Task must be addressed promptly with requisite information.

In the end, the Chair directed all the CEOs to improve their public dealing so as to resolve the issues of the teachers and public likewise. They were also assured complete cooperation of the department.

The meeting ended with a note of thanks to the Chair.

Schools will be closed for summer vacation after taking exams. Murad Raas

HSSC Special Exams 2020 Revised Schedule Issued For All Board Of...

Application Submission Date For E-Transfer 2021 Has Been Extended